Stray animals in Malaysia: the Reality I Saw Travelling There For the Past Months

I spent a good two months in Malaysia working as volunteer in marine life conservation projects. In this article I will outline the things I saw and the unique issues that malaysian strays face.

First of all let me explain a bit about my time in Malaysia. I worked exclusively in Sabah and
mainly in the Borneo Island. During that time I lived both in big cities, tourist locations and tiny small villages, so I got the opportunity to witness the situation from different points. Since this competition started I also reached out to the shelters in Kota Kinabalu area in order to get their perspective and reality. In this article I will do my best to distill everything I found out.

There are a few points that I can make about the situation of stray animals in Malaysia. I would like to start with one that took me by surprise: the stumpy tailed cats of Malaysia. It is a local breed of cats with short tails, often twisted at the end. As I quickly found out a lot of people consider cats with full tails “cutter” and prefer them as pets. Even shelters putting ads take this into account and try to post pictures avoiding the tail, often resulting in people arriving to see the animal from the ad and after a brief disappointment pick a younger full-tailed cat to bring home.

Additionally since stray animals are overpopulated and the cnr (catch neuter release) efforts are admirable yet very limited cats with stumpy/squigly tails can be found pretty much everywhere.
Bellow you can see princess she belongs to an actual wildlife protection center and yet she is not neutered. As I found out, not long ago she got her second litter in 5 months.

Princess is welcoming guests in the registration desk. Note the short tail. 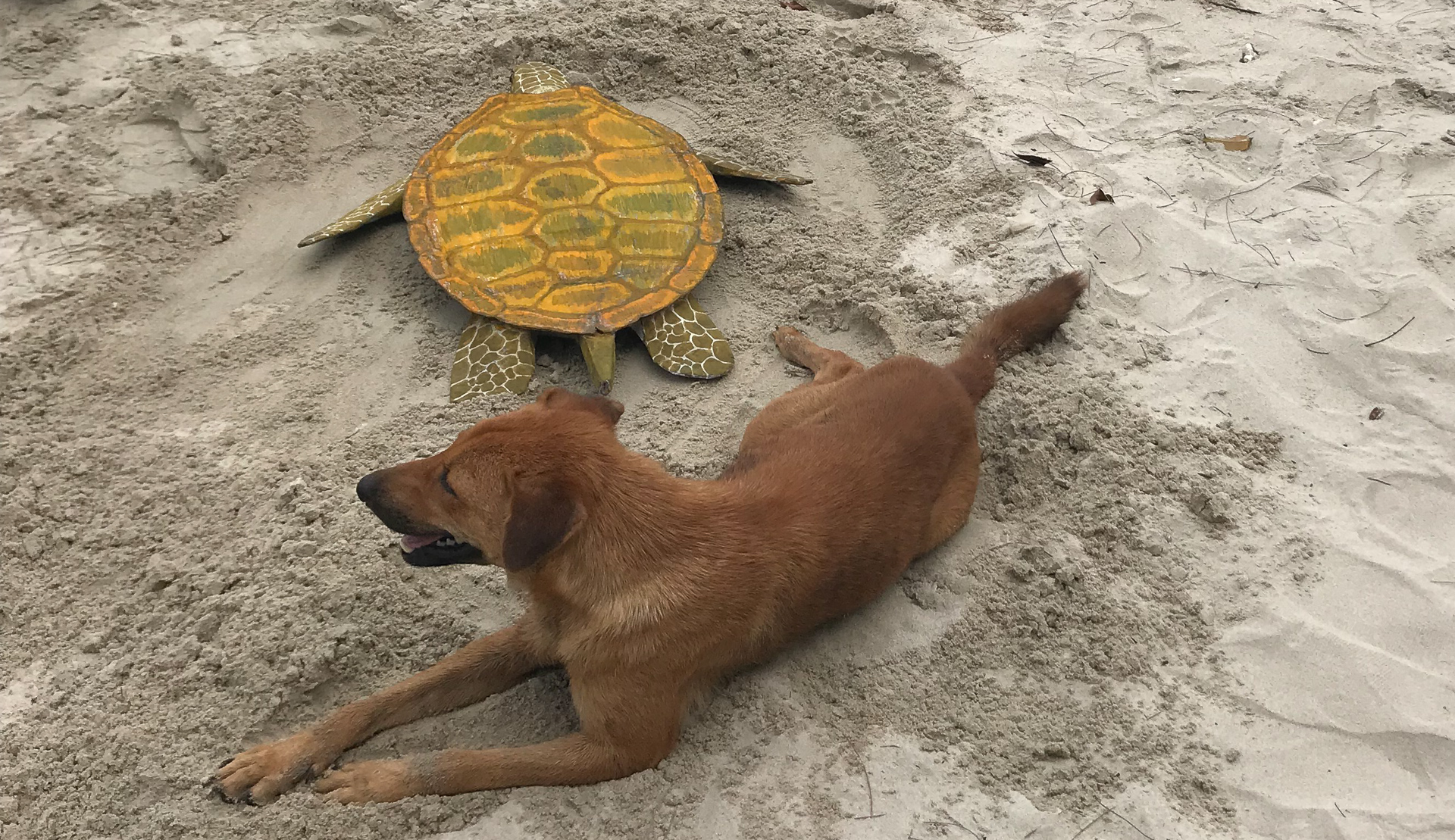 This is a currently pregnant dog resting next to a replica of a sea turtle(long story). She was absolutelly sceletal and still bloated from her litter. Back in the village I found out that she had a litter not long ago and most of them got eaten by wildlife animals.

Another trend I noticed, for dogs this time, is religious and rather sensitive. I have to add here that I in no way shape or form judge any religion, my article will be strictly about the animals and the factors that I noticed affect them. With that said Malaysia is, in a big percentage, muslim. This affects many aspects of life for example, many restaurants are advertising that they do not cook any pork at all, even if they are run by non-muslims.
When it comes to dogs the effect is rather immediate: for devoted muslims it is haram to even touch a dog, and for the not-so-strict it is socially unacceptable to do so. This leaves about 40% of the population of Sabah pretty much out of the question of owning a dog.

I should add here that talking to locals across religion cats seemed to be considered as “pets” while dogs were seen more as “useful”.

There is, for sure, a culture of seeing dogs as tools and not as pets. Some are seen, and mainly heard, tied in yards as guards. This culture though can have a positive effect: it is creating a reason for adopting bigger dogs.

I spoke earlier about the overpopulation of stray animals and the fact that very few are neutered. From my observations, mainly younger people in big cities considered neutering their pets, an understandable trend since the operation is costly and a big percentage of the population simply cannot afford it. Please look at those two pictures: 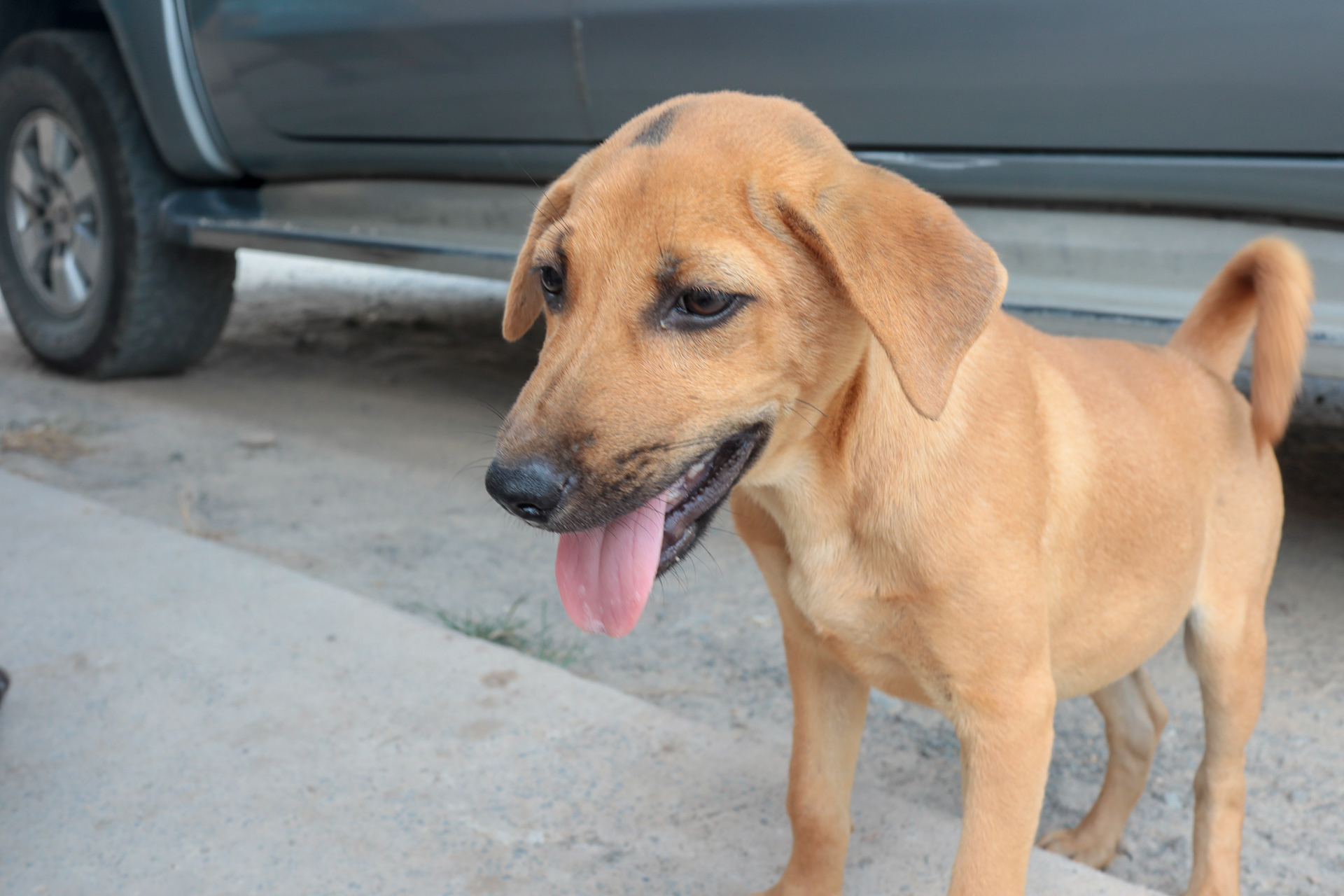 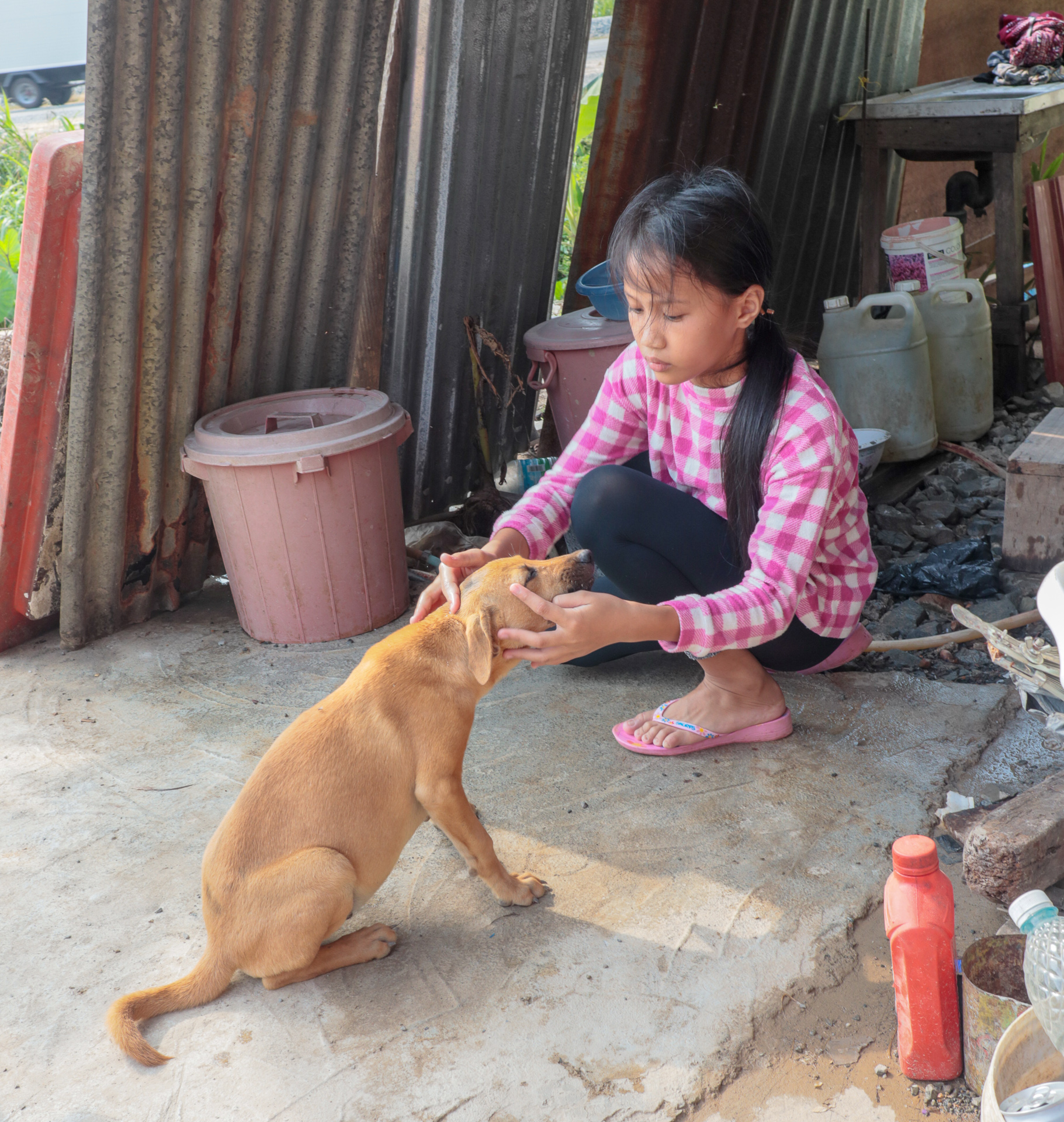 Yes this puppy is not neutered nor vaccinated, but try to pay attention at the house this girl is living in. I can not see a way that this family can afford to vaccinate or neuter their animals.

Having most of the cats and dogs not neutered and mainly outdoors animals can easily explain the overpopulation. A family is not very likely to adopt all of the litters their pets produce leaving them to fend for themselves in the “wild”. In the city, sticks are utilised in restaurants to drive them away, while in a small village I witnessed kids picking up puppies and throwing them over their head as a game.

It is no wonder that dogs keep their tails and heads low and are always ready to jump out of the way. 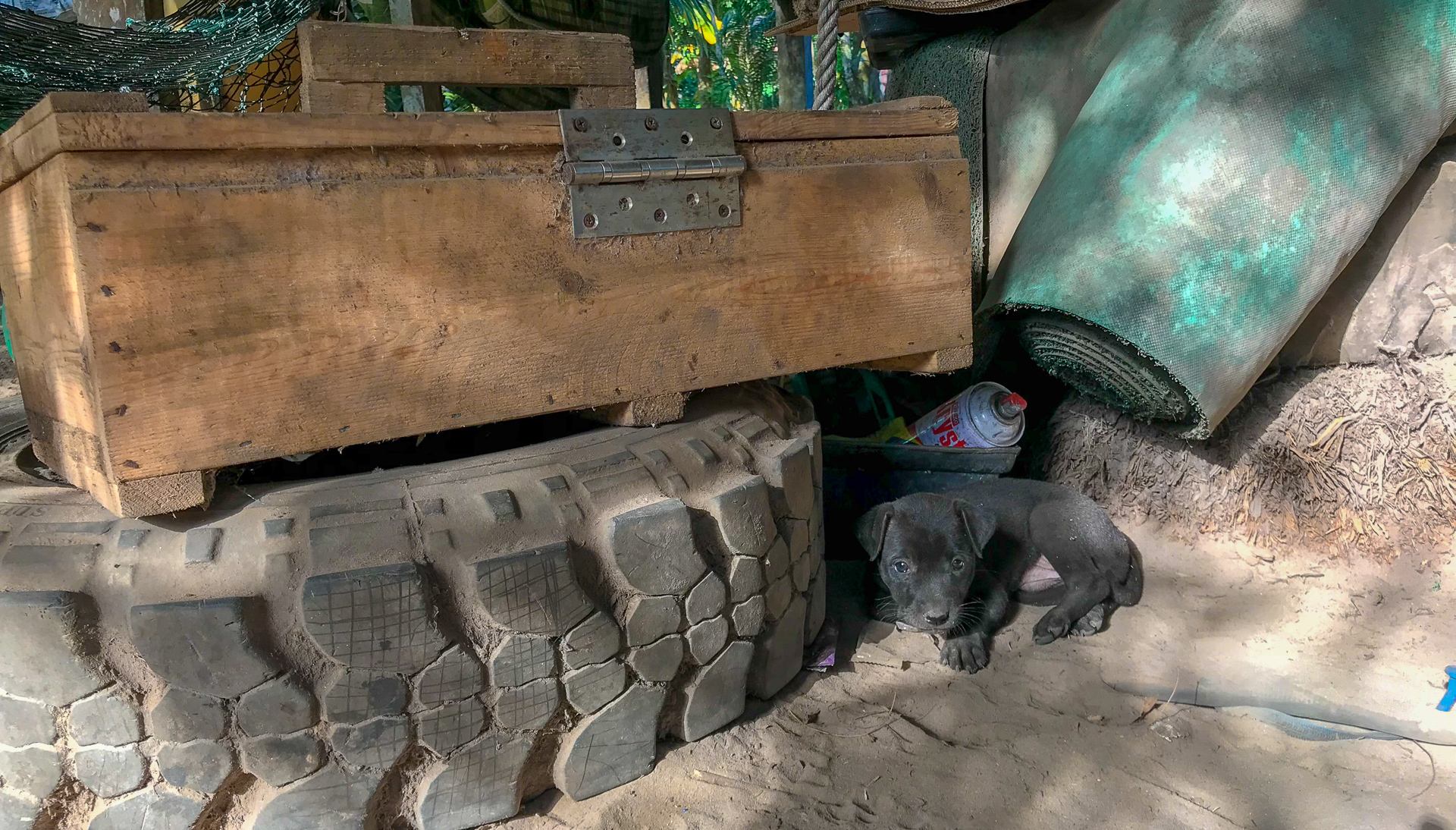 A puppy scarring away under a pille of things in a small village in Kudat. 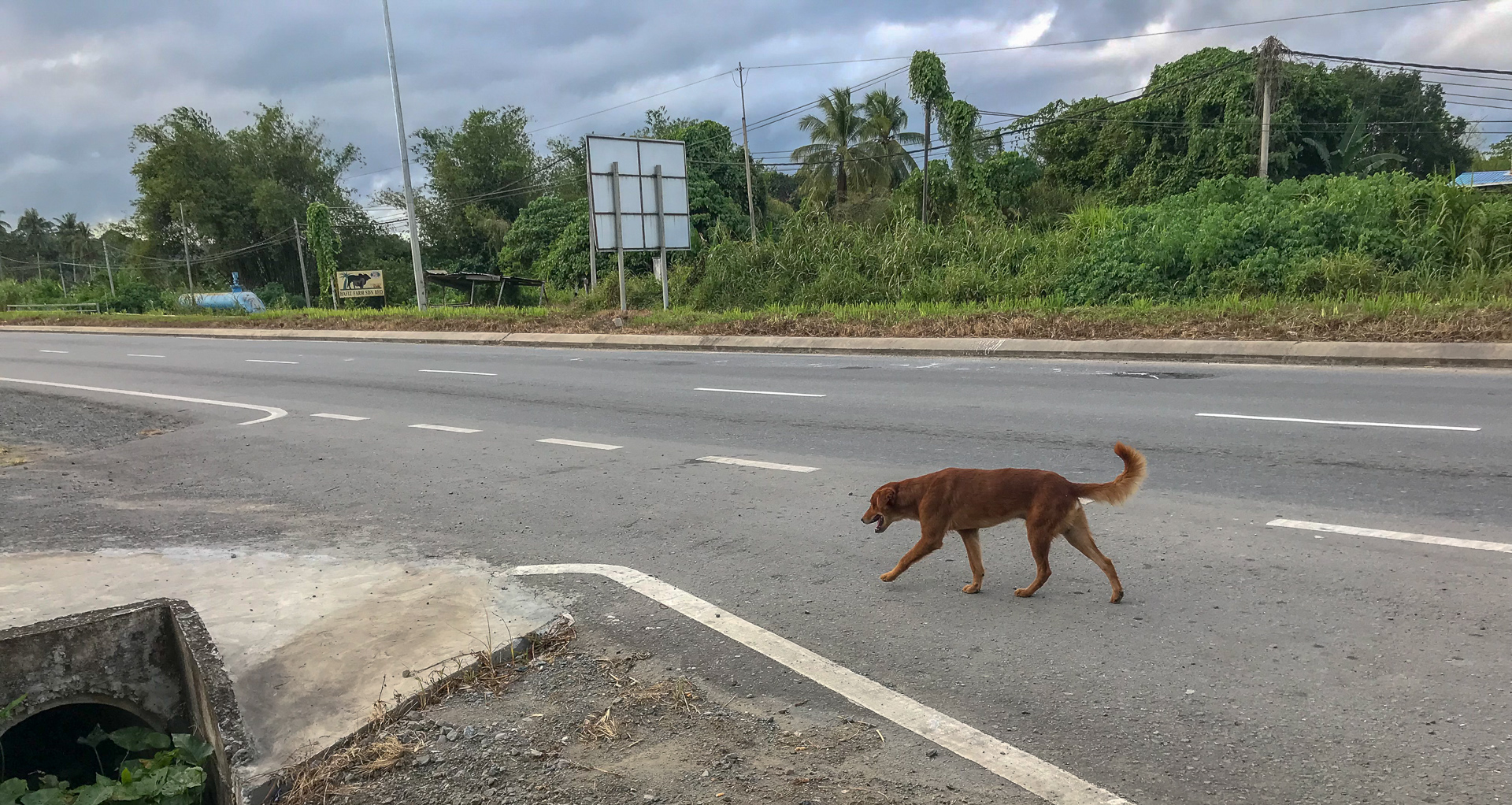 This is the closest I could get to this dog. We crossed paths in a bus stop in Sandakan and he kept a fair amount of distance. Note that this is also one of the healthier dogs I saw. 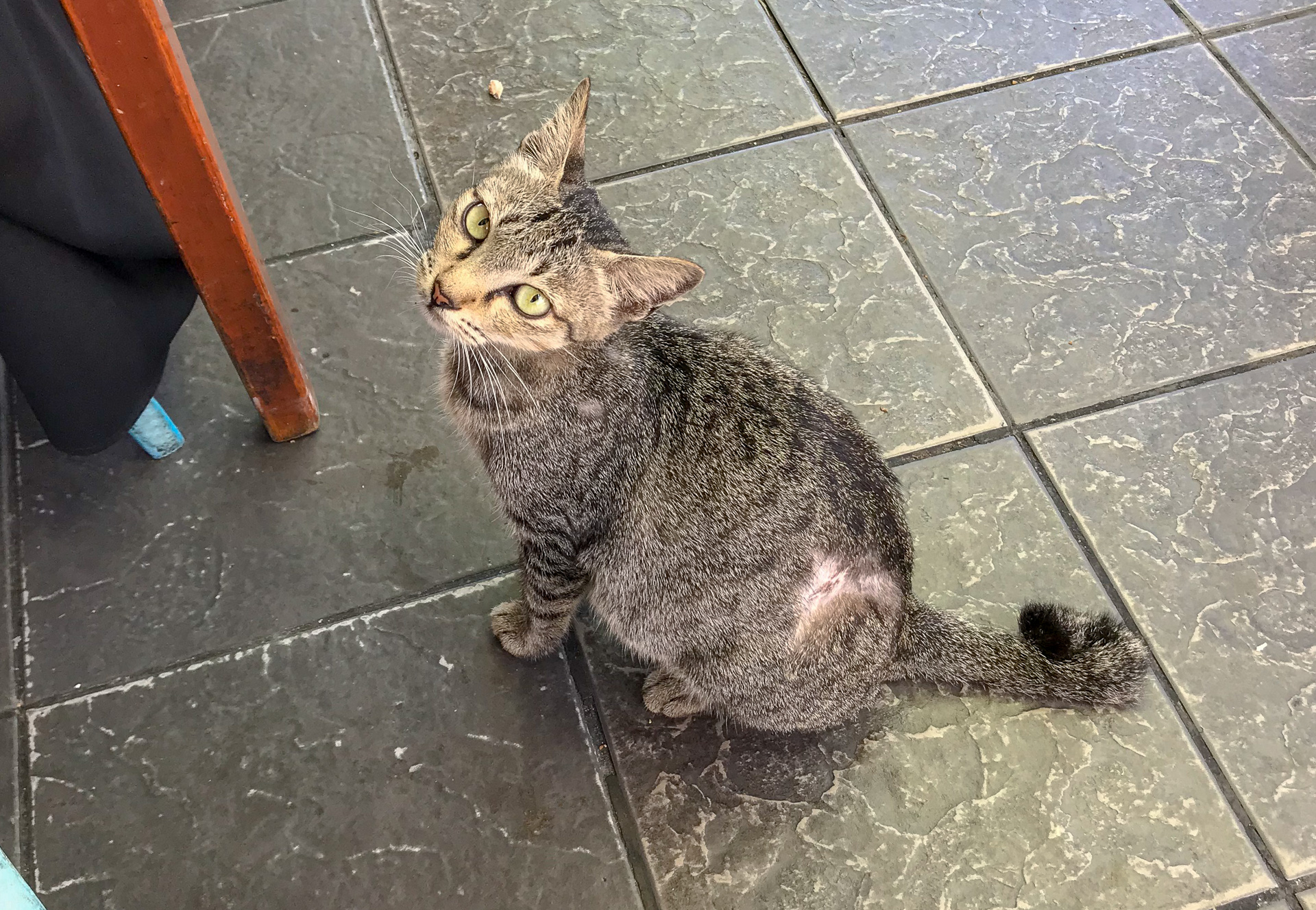 In a restaurant in Sandakan. This cat patiently waited for the scraps. Note the big wounds on her back, and the tail that looks bend on itself.

A dog I saw next to my hostel in Sandakan. I stayed in the more industrial part of the city since it was cheaper. Note the big scars at the rear and back and the loss of fur.

Quite contradictory to this is the life of cats in diving spots. They seem to be content and happy. The scraps of the tourists flowing every day to the diving spots keep them nice and plump and there is little reason to fight so they are absolutelly beautiful and fluffy. They had an extented social training getting human contact in a possitive way every single day and in my opinion they are perfect adoption material. Their features show calm and content. And in extreme cases they own even the tables. 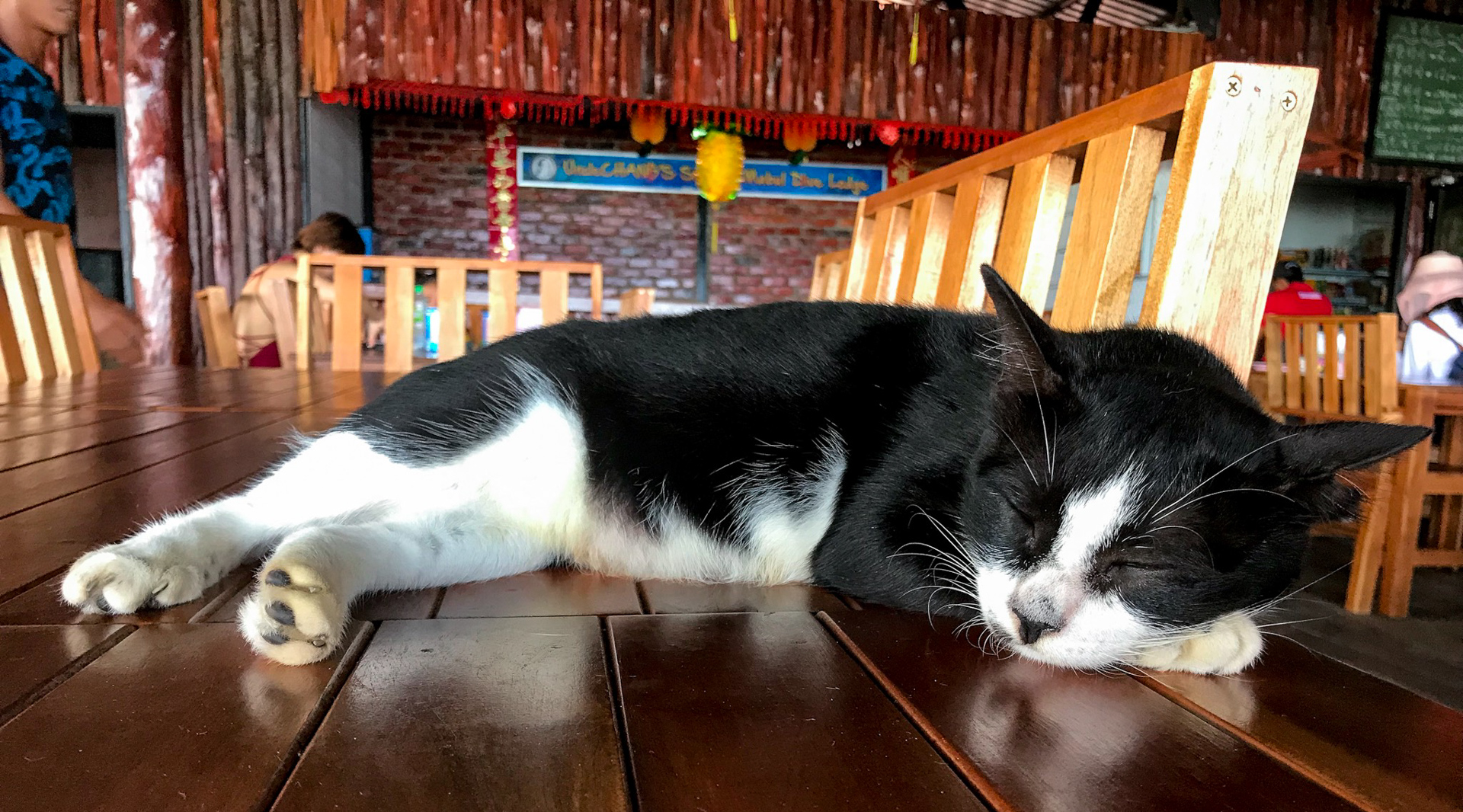 I guess this table is taken.

Note how she is looking straight at the camera this cat has no issue socialising with humans.

This last observation lands me in the last set of points I want to make. Lots of the stray animals that are rescued had a rough time fending for themselves against other strays, wildlife and humans combined. While doing a BBQ near a village two dogs almost were fighting teeth and claws out over a few scraps.
This lifestyle leaves them with physical and emotional scars. Many of them have behavioral issues and aggression, resulting in them spending the rest of their lives either in the street or in a kennel with other “problematic” animals. There is little to non rehabilitation efforts since the shelters seem to be overloaded and understaffed to begin with.*1
Even for the many that retain their playful character and kind behaviour the scars and skin issues make them less appealing to potential adopters.

A silver lining in the above can be the power of storytelling. A dog or cat that was rescued in a horrible condition and got back to full health is great material for a heart-warming story. And if this story is utilised in the ad then the animal has much better chances to get adopted.

Now how can all the above help with the kaggle competition you ask? I have tried to make a few points below of ways that an add can reflect and adapt to the above, and that in my opinion we can track coding wise.

*1 I am not going to get into how many animals a shelter should have and what kind of care is adequet or not and please don't try to get there either. I have tons of respect for the work these people are doing in the conditions they are doing it in so let's leave it to that.