3D Printing Medical Breakthroughs - And What They Mean For Us Vets

Look at the remarkable list of 3D printed medical products and imagine the huge potential of applying these technologies in veterinary medicine.

What is a 3D printer?

A 3D printer is a computer controlled robotic system which creates three dimensional objects through the layer by layer addition of material.

In practice, the printer adds one layer of material after the other until a fully formed object is created.
3D printing is part of the innovative process called additive manufacturing, which means the production of the 3D solid objects from a digital file. It is a rapid and economic tool for engineers and designers used to produce complex parts for machines, aircrafts and vehicles. Nowadays 3D printers have become commercially available in affordable prices, making them available to small businesses and even to households.

The first step is the creation of the model, using various special CAD softwares (Computer Aided Design). We can develop a structure, decide how it will look and where we want to place the material in a two dimensional slice and then stack all the slices together, so as to create a three dimensional structure. Once the model is ready, we can feed it to the printer, which will start creating it layer by layer till we get for example this deer:

Right now 3D printing is one of the new technological advancements that is on its way to revolutionise healthcare. It changes the way medicine is being practised by advancing personalised medical services and introducing new ways to create drugs and to manufacture medical equipment.

Let's see the most encouraging applications and envision their use in veterinary medicine.

3D printing in medicine, or as it is called 3D bioprinting, involves the assembly of structures for medical applications. We can create structures that are either wearable or implantable, built from a single or multiple materials.

Medical Equipment and Supplies in a fast and cost-effective way

Nowadays, the healthcare sector is one of the most money consuming one, as the medical equipment and supplies are extremely expensive. 3D printing offers a new cost effective way to produce splints, casts and medical models used for educative purposes and to plan surgical procedures.

Vets from the DohDang Dong veterinary hospital created a blueprint for producing different kind of splints which can be tailored to the weight and dimensions of the animal. If you are interested in exploring this field in your clinic, the file of the splints are available for non-commercial use.

3D printing can be used for pre-surgical planning of complex cases so as to increase the information that is available to surgeons. Working on the model before the actual procedure can help to choose the appropriate material and equipment, such as plates, in advance, and optimising the precision and preparedness.

In these cases the 3D data is acquired from MRI or CT scans. The info are exported as a DICOM (Digital Imaging and COmmunications in Medicine) file, which can be used in software compatible with the printer. For the final product we can use a big variety of materials depending on what will serve better our purpose such as glass, ceramics, plastic or metals.

3D printing can change the way humans experience a bone break. Some companies are capable of modelling the patients part and manufacture a tailor-made 3D printed splint.

The american 3D printing Activarmor company is 3D mapping the injured limb, so as to create a cast that fits perfectly the anatomy of the patient. The produced cast is waterproof and their aim is to adapt to a busy and active lifestyle. For now it is only available for fractures in the hands, while it is stated that it does not apply bone level strength to the extremity.

The spanish 3D printing Exovite company uses a 3D scanner to capture the image of the patients limb and to generate a personalised splint that is then printed in a 3D printer.

As mentioned above in order to create a 3D printing splint we need a 3D scanner, which usually is expensive. A student from the Netherlands designed the Curatio hand scanner which, by using laser pointers, cameras and a raspberry pi computer, is able to precisely digitise the hands and fingers.
For now this technology is used only occasionally in veterinary medicine. As an example, a 3D printed mask manufactured by the UC Davis Vet team helped a puppy to heal after injury causing multiple fractures in her skull, including the zygomatic arch, jaw bones and the temporomandibular joint. 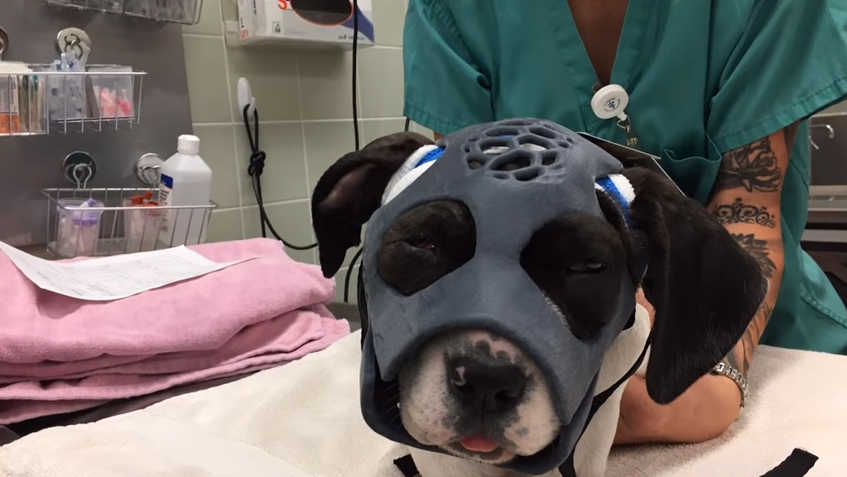 The replacement of body parts with artificial ones is not something new and it started with external prosthetics. 3D printing allows the customisation of the prosthetic part to the needs of the individual. 3D scanning is used to show where the artificial part will be attached to, so as to have a perfect fit. Moreover, through 3D scanning we can produce a symmetrical and cost efficient part.

Projects with 3D printed parts are spreading around the globe, as they provide a sustainable and effective solution for patients in the developed, as well as the developing world. Communities, universities and labs are bringing prosthetics to people in need of mobility devices, that wouldn't have access otherwise. 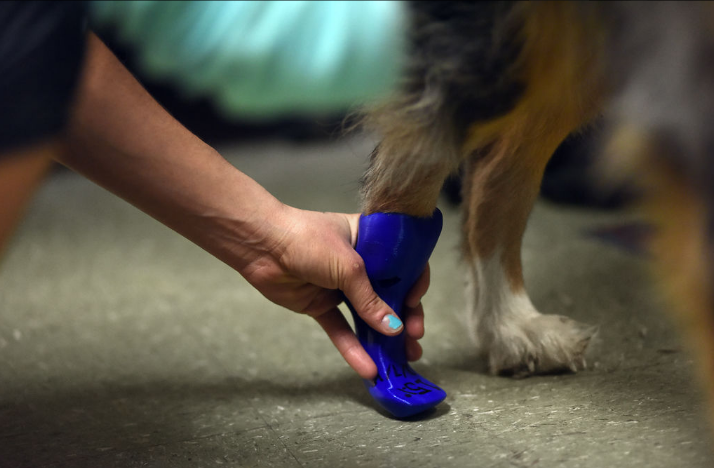 As veterinarians, we can feel the acceleration that this kind of application would have to the future life and potential adoption of stray and injured animals. Simultaneously, it is a new tool to the families with immobilised animals, contributing to the improvement of the quality of their life. Moreover, 3D printing can save a lot of animals from amputation or euthanasia, creating for example a tailor made prosthetic limb that would let them walk.

The potential of 3D printed prosthetics expands to the wildlife world, with a lot of animals getting a second chance, such as pelicans, turtles, ducks… In addition to the impact on the life of individual animals, 3D printing has been used already in conservation with encouraging results for the future.

After a huge decline (83%) of the population of bats in Kentucky due to habitat destruction and an epidemic, a robotics team used 3D printed "bunkers" to restore the population, which anyone can easily print at home. 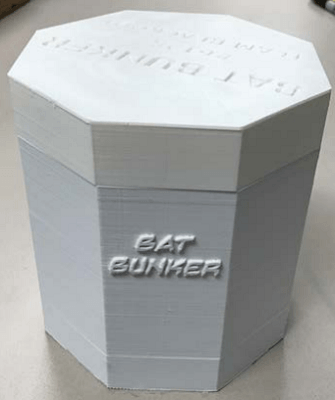 Can we save rhinos from poachers with 3D printing? This is a question that the bioengineering startup Pembient wants to answer. The co-founder Matthew Markus explains in The Guardian, that the company aims to thwart the illegal wildlife trade by recreating animal products in the lab. The goal is to produce rhino horn biologically similar to the original, but only at one tenth to the original costs. As a result, buyers and illegal traders will switch. This initiative will start with rhino horns, but will expand to more complex structures, such as elephant trunks.

The production of bio-engineered horns raised concerns in the wildlife science world. There are a lot of interesting points that need to be addressed before letting the product enter the markets. In short it is possible that the market can work as a cover up for illegal trade, as it will be difficult to differentiate the real horns from the synthetic ones. Furthermore potential advertisement will increase the demand and attract more poachers. 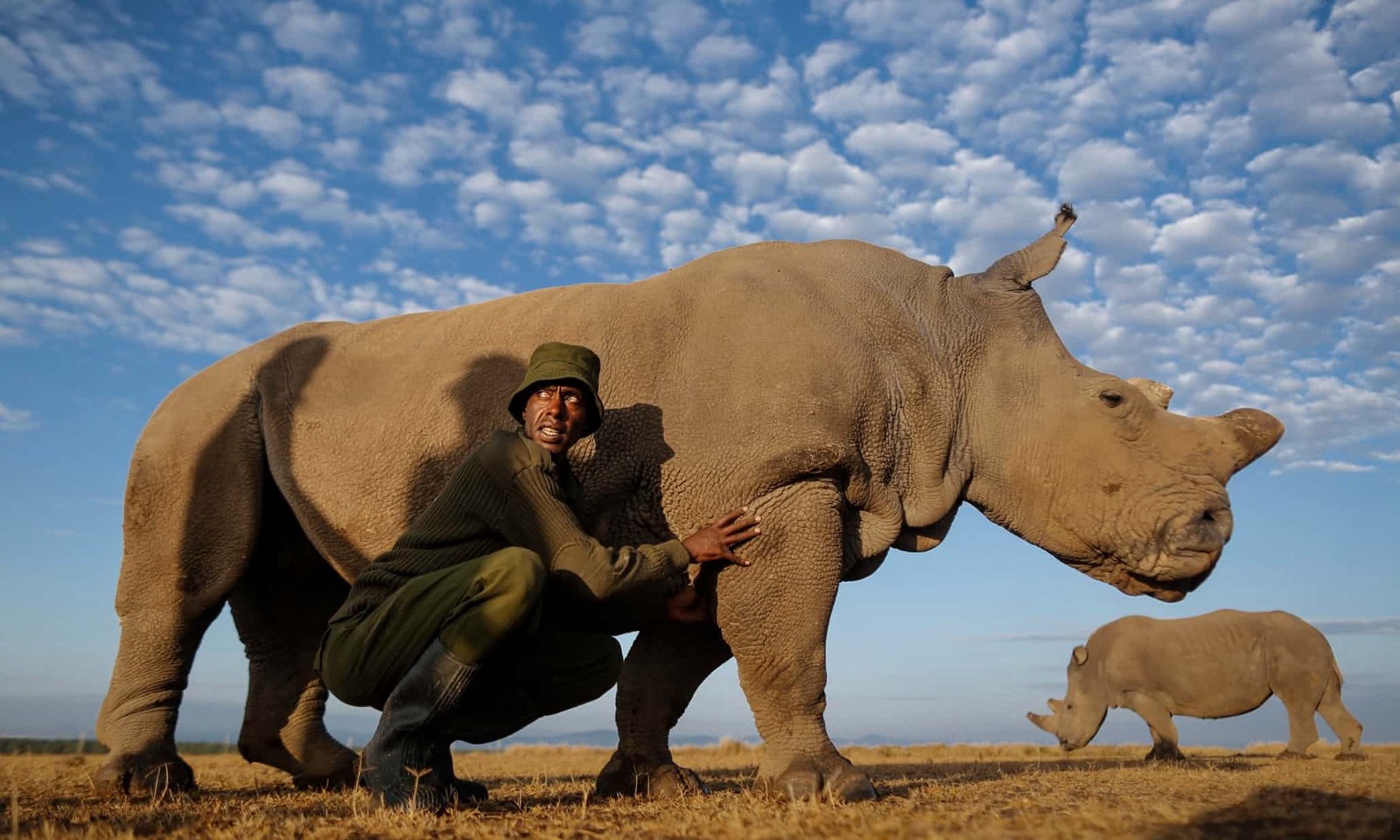 It is clear that conservationists and innovators should collaborate, aiming to direct the use of new technologies responsibly to the rescue of endangered species.